Who says all the software jobs have fled? The disassembly field is full of opportunity.

Listening to excerpts of Bush's news conference today, I couldn't believe it when I heard him say 'disassemble' when he meant, 'dissemble'. What's more, he went on to explain what the word meant. Wondering if I had heard right, I looked up the transcript. Here's the relevant part (ignore for the moment his treatment of the gravity of Amnesty's accusation):

QUESTION: Mr. President, recently Amnesty International said you have established, quote, a new gulag of prisons around the world beyond the reach of the law and decency. I'd like your reaction to that, and also your assessment of how it came to this -- that that is a view not just held by extremists and anti-Americans, but by groups that have allied themselves with the United States government in the past, and what the strategic impact is that in many places in the world the United States these days under your leadership is no longer seen as the good guy.

BUSH: I'm aware of the Amnesty International report, and it's absurd. It's an absurd allegation.

The United States is a country that promotes freedom around the world. When there's accusations made about certain actions by our people, they're fully investigated in a transparent way.

It's just an absurd allegation.

In terms of, you know, the detainees, we've had thousands of people detained. We've investigated every single complaint against the detainees.

It seemed like to me they based some of their decisions on the word of and the allegations by people that were held in detention, people who hate America, people that have been trained in some instances to disassemble, that means not tell the truth.

Not for the first time, I wonder if the W stands for Wodehouse (see Bertie Wooster in Miami). As explanations go, this is right up there with: "My wife", said Lord Emsworth, "Was alive at the time", making it clear that there was no question of a voice from the tomb.

Let us 'differ' to Bush on the matter!

I was in the library reading room when suddenly a strange specter of a man appeared above me. He was a ragged fellow with a bushy beard, dressed in the clothes of another century. He clutched news clippings on class in America, and atop the pile was a manifesto in his own hand. He was gone in an instant, but Karl's manifesto on modern America remained. This is what it said: 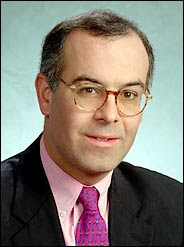 The history of all hitherto existing society is the history of class struggle. Freeman and slave, lord and serf, capitalist and proletariat, in a word oppressor and oppressed, stand in opposition to each other and carry on a constant fight. In the information age, in which knowledge is power and money, the class struggle is fought between the educated elite and the undereducated masses.

The information age elite exercises artful dominion of the means of production, the education system. The median family income of a Harvard student is $150,000. According to the Educational Testing Service, only 3 percent of freshmen at the top 146 colleges come from the poorest quarter of the population. The educated class ostentatiously offers financial aid to poor students who attend these colleges and then rigs the admission criteria to ensure that only a small, co-optable portion of them can get in.

The educated class reaps the benefits of the modern economy - seizing for itself most of the income gains of the past decades - and then ruthlessly exploits its position to ensure the continued dominance of its class.

The educated class has torn away from the family its sentimental veil and reduced it to a mere factory for the production of little meritocrats. Members of the educated elites are more and more likely to marry each other, which the experts call assortative mating, but which is really a ceaseless effort to refortify class solidarity and magnify social isolation. Children are turned into workaholic knowledge workers - trained, tutored, tested and prepped to strengthen class dominance.

The educated elites are the first elites in all of history to work longer hours per year than the exploited masses, so voracious is their greed for second homes. They congregate in exclusive communities walled in by the invisible fence of real estate prices, then congratulate themselves for sending their children to public schools. They parade their enlightened racial attitudes by supporting immigration policies that guarantee inexpensive lawn care. They send their children off to Penn, Wisconsin and Berkeley, bastions of privilege for the children of the professional class, where they are given the social and other skills to extend class hegemony.

The information society is the only society in which false consciousness is at the top. For it is an iron rule of any university that the higher the tuition and more exclusive the admissions, the more loudly the denizens profess their solidarity with the oppressed. The more they objectively serve the right, the more they articulate the views of the left.

Periodically members of this oppressor class hold mock elections. The Yale-educated scion of the Bush family may face the Yale-educated scion of the Winthrop family. They divide into Republicans and Democrats and argue over everything except the source of their power: the intellectual stratification of society achieved through the means of education.

More than the Roman emperors, more than the industrial robber barons, the malefactors of the educated class seek not only to dominate the working class, but to decimate it. For 30 years they have presided over failing schools without fundamentally transforming them. They have imposed a public morality that affords maximum sexual opportunity for themselves and guarantees maximum domestic chaos for those lower down.

In 1960 there were not big structural differences between rich and poor families. In 1960, three-quarters of poor families were headed by married couples. Now only a third are. While the rates of single parenting have barely changed for the educated elite, family structures have disintegrated for the oppressed masses.

Poor children are less likely to live with both biological parents, hence, less likely to graduate from high school, get a job and be in a position to challenge the hegemony of the privileged class. Family inequality produces income inequality from generation to generation.

Undereducated workers of the world, unite! Let the ruling educated class tremble! You have nothing to lose but your chains. You have a world to win!

I don't agree with everything in Karl's manifesto, because I don't believe in incessant class struggle, but you have to admit, he makes some good points.

So the filibuster showdown was averted at the last minute! Much joy in Washington, with pictures of Frist and Reid looking all set to do the minuet. So all's well? So one would think from hearing the Democrats. MoveOn sent around a message of congratulations to everyone who had contacted their senators in Washington urging a no on the 'nuclear' option. The memo from MoveOn pointed out that James Dobson had cried that the Republicans had caved in the face of a united Democratic front.

This victory is all very well, but it kinda reminds me of strikes I used to see when I was in India. The union would call a strike. After a couple of days of demonstrations and picketing, the management would dismiss the workers. Then the entire focus of the demands would shift to 'reinstall the workers', with the original purpose of the strike lost. After all the sturm-und-drang, what has been obtained? The status quo, nothing more.

The Republicans have promised to set aside the nuclear option, while the Democrats have conceded all a the things on which the entire filibuster effort was based. The "Agreement", as it is reverently referred to in the newspapers, agrees to provide 'up or down' votes to, among others, Priscilla Owen and Janice Rogers Brown, the most egregious of Bush's choices. I watched Barbara Boxer lay out the case against the latter in great detail, explaining why the filibuster was needed.

So the Republicans have won. They have advanced their nominees, while Frist summarized his smug threat, that the nuclear option would be revived upon 'bad faith and bad behavior'. To be defined at will, no doubt.
Posted by njn at 10:12 AM No comments:

George Galloway, English MP and vociferous opponent of the Iraq war, appeared before the Senate Homeland Security panel this week. Speaking extempore (as it appeared from the video), he blasted the panel's chairman, the slimy Norm Coleman who, it might be remembered, was Clinton's Minnesota campaign chairman before defecting to become the Republican opponent who won after Paul Wellstone's accidental death before the 2002 elections.

One wishes American politicians would speak plainly, as Galloway did. After his plain speaking, to which clearly there was no answer from Coleman, Sen. Carl Levin stood with Coleman to condemn Galloway.

You can also watch Galloway's appearance on video.

Read the Scottsman's piece on the same topic.

The Mess in Iraq - No reprieve in the short run

Andrew Cockburn, the reporter for the English newspaper, the Independent, has written this lucid account of the problems in Iraq. It is a sober yet chilling rendition of how much has gone wrong, and how deep is the quagmire the US is in. Read it fully here.
Posted by njn at 11:45 PM No comments:

The Real ID Act of 2005 passed the House by a whopping 261-161 margin. Though seemingly innocuous, seeking to verify immigration status before issuing drivers licences has been the main feature highlighted in newspaper accounts, this article will tell you that there are far bigger issues involved. Embedded within the bill is a provision to include RFID, which means not only are you required to carry proof of legal status with you at all times, your coordinates can also be tracked.

The senate is going to consider it, given that it has been bundled with a budget bill (though there is a move to exclude immigration issues from the budget bill). If you want to voice your opposition to it, you can go to www.eff.org and sign a petition.

The issue is making ripples as far across the globe as the 51st state, which is what brought it to my attention.
Posted by njn at 11:19 PM No comments: